Have you ever worried that people might take you too literally? When I tossed off the EastBay C tagline ("come fly with Mark in the lovely San Francisco East Bay") this is certainly not what I was thinking!

I went out with Andreas today... he had figured out the problem he was having with his FPV receiver -- a bad connection on the ground station -- and had everything ready for trying out out FPV + ArduPilot.

First, the good news... APM + FPV is a great success.  Fly-By-Wire mode perfectly controls the plane while flying FPV -- smooth turns, no problems with oversteering etc.  And if you ever get disoriented, a simpe flick of the switch puts the plane into loiter mode while you get things figured out.  It's also great for switching pilots... pop into loiter mode, swap the video, and take up where the first pilot left off.

Things were going great, when suddenly the receiver lost connection; being in fly-by-wire mode, the Zii was content to continue flying the direction it was headed -- North, towards Marin County.  Andreas headed after it, with me following behind.  He ran towards the north part of Chavez Park, and found a lady who had seen the Zii fly by.  In fact, she had seen the Zii land in the water.  Here's the view, facing north; Point Richmond is in the background. It's sort of visible in this picture here.  Andreas was not in a cheerful mood at this time... when I pulled out my phone to document things, he sort of groaned, "do you have to be taking pictures of this?"

We sat and watched the Zii in the water for a while... the wind was blowing back to us, and it looked like the plane was getting closer.  Unfortunately, the tide was moving to the west... the plane got closer to us, and then started moving away, floating towards the southwest. We weren't sure if it was floating towards San Francisco, or if it would veer out to the Pacific under the Golden Gate bridge.  I snapped this picture as the first Zii framed by the Golden Gate.  Trappy, I hope you're impressed!

There were a couple of sailboats around, and I thought we might be able to get one of them to come to the rescue.  Unfortunately, they were a bit too far out to communicate with.  But that gave Andreas an idea... he had a friend with a boat that sailed out of the Berkeley Marina.  He pulled out his phone, and made a call. Miraculously, the friend was driving over the Richmond Bridge... he would turn around, and be there within 30 minutes to launch a water rescue.

Traffic was good, the boat was launched quickly, and it came up the west side of the Bay.  Andreas saw the boat, and pointed out the Zii. It's just where his hand is.  We passed the time speculating about which pieces of the plane could be recovered.

Time between initial distress call and rescue, 27.5 minutes.  Hooray Captain Tim!  And our friend Jim who had come out with us did a great job of making sure all the gear didn't walk away.  Hooray Jim!

Here's the recovered Zii.  The plane is in perfect condition -- nice job, RiteWing!  The GoPro was fine as well.  Wiping off some water, it was still powered on and running well.  Too bad we didn't have it recording all that time!

Electronics:  The battery, APM 1, receiver, servos, and motor seem to have survived.  The battery compartment wasn't filled with water... the Zii must have landed smoothly and stayed flat the entire time.

The  GPS, XBee, and video transmitter were lost... it looked like there was a current active on these devices, and the brackish or salt water caused the power pads on the board to corrode away. 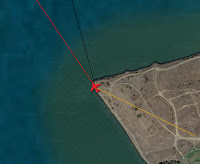 Here's the last logged location, at the northwest tip of Chavez Park, and heading north.  Strange,  that as soon as it went over water it seemed to lose power and stop logging.  Is the City of Berkeley running some nefarious experiment here, perhaps left over from the 1960's?  Will Chavez Park suddenly disappear in time?