Here's some notes on elevon mixing with er9x.  It's pretty simple once you know the basics.  Here's some background on how elevons work.  Check out the calculations page... I think it's the only page on the Web with the mixing formulas -- at least as far as I could find!


Here's some notes on elevon mixing for the DX6i and Stock 9x.  It's interesting to compare the different approaches.

Here's an express version of the video:
toc: Elevons, er9x 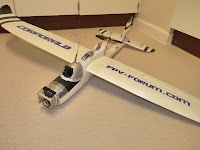 Bixler2FPV has done a pretty comprehensive job documenting his upgrades.  If you're upgrading a Bixler 2, check it out!


I think I'm going to reinforce the wings as he did:

This post is mainly for my own convenience, listing out the software I've downloaded to do thing 3D-printerish.

Here are two options for upgrading the Power System on a Bixler 2 if you've got the motor mount extension.

This seems to be a popular setup that many people use.

Here's one that even stronger... the 10 inch prop requires you to cut into the tail boom a bit.  Andreas and I are hoping that the extra power will be worth it when it's full up on FPV and autopilot gear.

(note: this motor has a limit of 32 amps, and as configured it hits 30 amps on the bench... be forewarned!)


BTW, regarding servos... you need 6 if you do the flaps.  I'm pleased with these.  If your radio can handle the mixing, you can use two channels for the flaps.  Otherwise, get a servo reverser.

Here's a neat hovercraft over at Instructables. Looks like a lot of fun and not too much work to put together.

Email ThisBlogThis!Share to TwitterShare to FacebookShare to Pinterest
Labels: hovercraft, Things To Try

RTL Fasteners has a great collection of metric fasteners at what seems to be a pretty good price.  Way better than the local hardware store, where they seem to believe that M2 and M3 fasteners are made  from 24K gold!  The have a giant super-pack as well.
Posted by Mark Harrison at 3/17/2013 09:25:00 PM No comments: 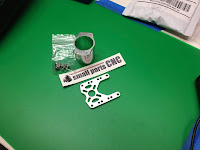 Here's the Small Parts motor mount extension I got for the Bixler 2.  It's rated for up to 9 inch prop, but following Andreas' lead I trimmed a notch in the Bixler tail and fit a 10 x 4.7.  It draws 30 amps off a 3S battery.

Some notes on HD keychain cams.  #16 v2 seems to be the good one.  eletoponline365 seems to be a good vendor.  The "D" lens seems to be popular for FPV coz it gives a wider field of view.

Some nice airbrush tutorials on RCGroups.  Be sure and look at the first three posts.  More here.  And a store-bought checkerboard stencil. 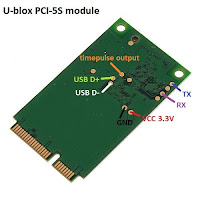 Cheap GPS hackery here. Very interesting, and it can save on some projects.  Ebay searchage for "U-blox PCI-5S" and "GPS Ceramic Internal Patch 1575.42MHz Antenna 20x20x7mm" about $15 combined!

I do a lot of construction and repair with Beacon Foam-Tac.  It's safe on all kinds of foams, doesn't have stinky fumes, dries quickly, doesn't yellow, and maintains a rubbery, resiliant quality. 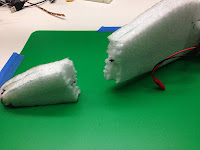 I broke off the nose of my F-22 yesterday, and thought I'd document the repair. EPP foam is great for this kind of disaster.  I applied the Foam-Tac to one surface, mashed and unmashed the surfaces together, let dry for a few seconds, and made the final join. 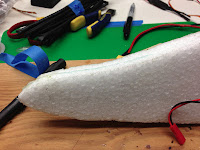 In under an hour the joint is firm.  I think the directions say  to let it cure for 24 hours for maximum strength.  As you can see here, it's nearly impossible to see the repair line.

Here's a video of the process.  Made with my new downshooter! 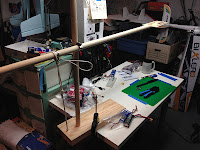 Here's my new downshooting rig!  It's always been a serious pain to set up a tripod on the workbench to shoot, because it takes up all the room on the workbench!  I saw this instructable, and here's my version of it.  The clever bit is using the two linked pipe clamps to make the 90 degree connector for the boom. 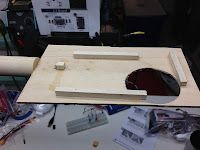 I followed the instructable pretty closely.  I used 1 inch dowels for sturdiness, and didn't bother embedding the tripod mount, since I've got an iphone tripod mount already.  Instead of using wire to attach the camera holder, I just cut the dowel and used glue. I liked how the instructions for aligning the iphone brackets use the iphone itself, wrapped in a plastic shopping bag, which doesn't stick to the epoxy. 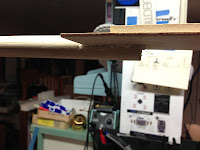 Here's a shot showing how I cut and glued the camera bracket.  I used PU glue (white gorilla glue) which was quick and filled up the gap from my crooked cut. 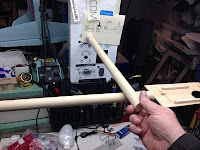 If the shaking is too bad, I'm going to mount the leftover bit of dowel as shown here (using two more pipe clamps) and brace the rig against the wall.  Hopefully that won't be necessary. 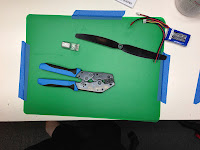 Here's a still shot.  The still camera has a wider viewing angle than the video.

Note: the camera was in portait mode, so I had to rotate this and the following pictures.  Be sure and put the camera in landscape mode if that's how you want to shoot. 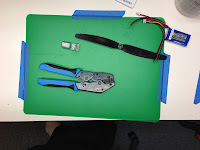 Here's a shot where I was bumping the table.  It seems it may not be as much of a problem as I had feared. 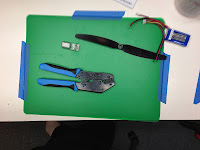 Here's a shot while the rig is vibrating up and down.  Even with this, there's only a little distortion. 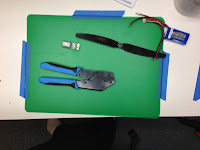 And a shot while the arm is oscillating side to side.  I gave the rig a pretty strong tug, far more than would ever be caused by a simple bump.  Watch this in the video, it's pretty alarming!

Overall, it looks like it might work pretty well, at least based on this first impression.  Here's a video showing the rig and taking some test videos.

Here's an interesting idea... a pendulum-style camera mount, where the weight of the camera is counterbalanced by the weight of the battery.  I've found two models, both of which have lots of videos  and details at the links.

Here's the ECILOP EASY.  It seems to be the original design (RCGroups thread).

And the Glyder 600 from FoxTech (RCGroups thread).