The Aeroquad arms are made from nice, thing 5/8 inch chromed aluminum, and happen to be the cheapie (err, "Best Value") towel bars from the local Big Box hardware store.

They're hidden away in a box on the bottom of the shelf.  Here's what the display looks like. 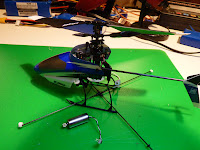 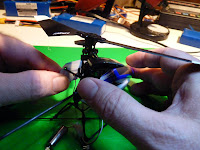 First, detach the canopy.  The little grommets pull off the mainframe, and stay attached to the canopy.  Here you can see the first grommet coming off. 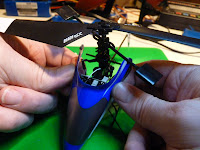 Pulling on both sides worked pretty well.  Press your thumbs against the frame and "pinch" the grommets and canopy off. 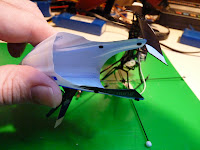 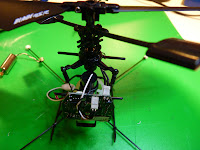 With the canopy removed you can see the motor and motor wire.  The motor wire is attached with an L-shaped connector, and the wire goes down the front of the main card. 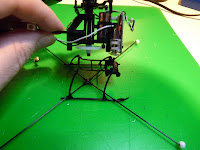 Detach the landing gear so you can get a good grip on the bottom of the mainframe.  It's all a bit delicate, so be careful not to grip the card, the servos, and especially any of the tiny wires.  Especially watch out for the antenna wire on the top right (facing forward) of the main board. 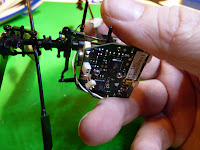 Disconnect the motor wire.  It will slide out easily. 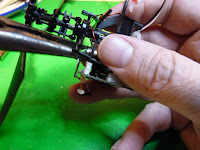 Here's the tricky part.  Use needle nose pliers to hold the motor, and apply gentle traction.  Wiggle the motor gently and it will start to slide out.  Be careful, the pliers are right next to the servo rods.  Don't break them off! 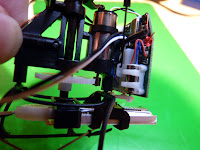 After the old motor has been pulled out, use your fingers to push the new motor in.  It will slide in smoothly.  Line up the pinion with the main rotor gear and make sure everything spins smoothly. 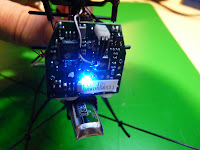 Attach the new motor connector to the main board with the same orientation as the old connector.  The wire will go down and not up.  Power up the unit and check to make sure everything is operating smoothly before reattaching the canopy. 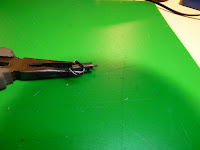 I connected the rudder to the vertical stabilizer using a pair of Dubro hinges.  This made the throw much smoother.  Andreas told me about this... cut slots in the stabilizer and rudder, and insert the hinges into the slots.  It will be nicely aligned.  I used the smallest amount of CA I could, and squeezed the CA deep into the slot before inserting the hinges.  Don't get glue on the hinges, or they won't hinge!

Instead of the traditional credit card, I used a CVS store card, being thinner, lighter, and a cheerful red color.  One problem: I didn't like the asymmetric angle when one card was attached.  It doesn't cause problems when flying, since you just straighten the "extended" card rudder when attaching to the servos, but it looks a bit untidy.

I had an extra card, so I tried squeezing them together... as you can see in the second picture, it looked quite nice.  It added an extra 3.2 grams of weight to the tail,, but I don't think that will be detrimental.

I taped the long edges together, then CA'ed that edge with some kicker.  I then CA'ed the two cards squarely onto the rudder, keeping the same appearance in the second picture.  I put a drop of glue into the gap and held it shut to keep the nice curve.

Following that, I attached the built-up rudder to the vertical stabilizer using the hinge and the method detailed above.  It was a bit trickier since I had to get both hinges aligned at the same time.  It doesn't hurt to dry-fit the hinges and reinsert them several times in order to get a nice smooth glide for when you're inserting the hinge with glue.

I set the servo attachment to the second hole, which looks like about the right amount of throw.  Instead of discarding the tape, I tidied it up around the edges and left it in place, mainly for the nice clean line it had.

Overall, I was pleased with how it looks and operates.  And I can tell people the rudder mod was done with Extra Care!

Here's some notes on the new Radical RC Quad Kit kit being produced by Radical RC.  Here's the RCGroups Thread where Radical Dave made the announcement.
This is the first post of several; subsequent posts will show assembly, outfitting, and testing  and will be collected here.
Here's what arrived in the mail.  The basic kit contains everything necessary for the frame except for the arms.  There are a couple of size choices for the arms, and you can order them in aluminum or carbon fiber.  All arms are 10mm and compatible (the web site notes) with their Slow Stick hopups.  At the bottom of the picture are some of the extra accessory pieces that are available.
Feedback welcome, leave a comment! 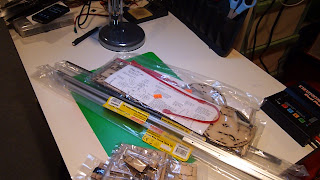 Here's the basic kit as it's packaged. 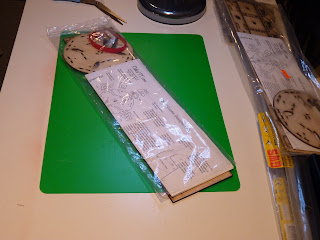 The round center platform is on the lower right.  Other Pieces have been laser-cut on the left.  Hardware and battery strap are sitting on top of the instruction sheet. 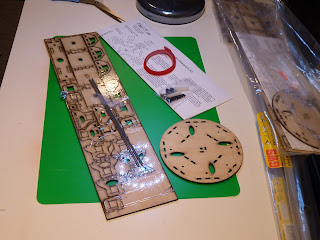 Here's the 5 inch center platform, upside down with the boom mounts.  Note that one pair of mounts are higher than the other, and that there's a small mount in the middle that will keep the center platform from buckling or warping when the screw fasteners are tightened. 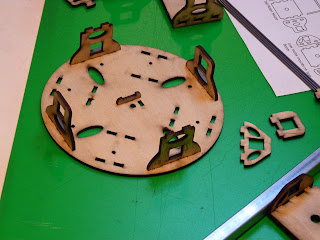 Here is the first aluminum boom in place.  One boom goes on top of the other, and the one closest to the board is sitting on the middle mount.  I'll be using the 600mm (24 inch) booms for real -- the short booms in this picture were easier to photograph. 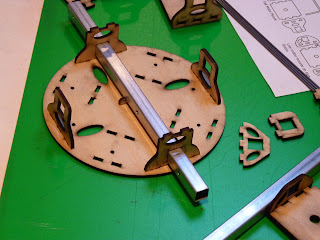 The second boom goes on top of the first.  Tolerances are good... there's no slack between the booms. 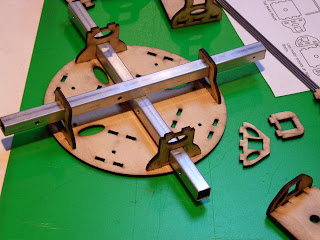 If you want to mount the battery underneath, just attach the battery mount to the boom mount. 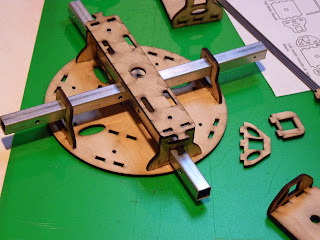 If you don't intend to hang the battery mount below, you can use the short mount. 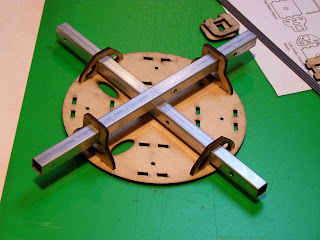 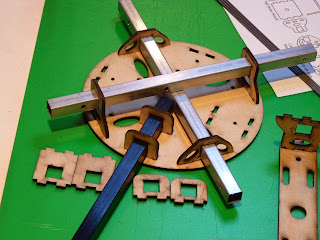 Here are the motor mounts, test fitted onto the short aluminum boom.  Note that there's two heights to match the two rods. 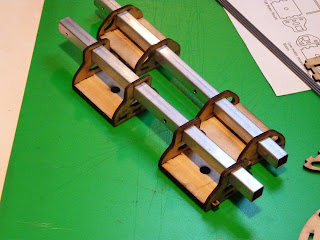 I crashed pretty dramatically over the weekend, and bent a motor mount almost 45 degrees.  It took under a minute to repair to like-new condition.

Interestingly, it was the perfect object lesson, as Chris Anderson (of DIY Drones -- we were at a Bay Area get-together where he was testing some of the new Ardupilot Mega 2.0 features) had just finished telling me that it was more important to make things easily fixable than it was to make things hard to break.


Here's links to the frame, which I'm quite impressed with: