Here's some notes to go along with the tutorial/video for er9x mixing.  Some people have said that they thought er9x was more complicated than traditional Tx software, but in many ways I think it's simpler.

Here's a few examples that should cover most of what you need to know to make good use of the mix screen, with accompanying video tutorial. (longer version to be uploaded later)


Mixing a Stick to a Channel

This is the simplest mix you can make.  Here's Channel 1, mapped 100% from the rudder (the "source").  The "+" is just a redundant note that  it's positive 100%; all percentages are shown with the sign.
Set this up, and you'll see the servo attached to channel 1 moves with the rudder stick.

The default 4-channel model definition is nothing more than the four sticks mixed to the first four channels.:

Mixing a Stick to Two Channels

Now let's do something that's not especially useful in a practical sense, but will be handy for this tutorial.  We'll map the rudder stick to two output channels.
Moving the rudder stick now moves the two servos attached to channels 1 and 2.  In some of the following examples, we'll modify channel 2 and leave channel 1 unmodified as a reference.

There's a reversing option on the Limits menu, but it's not really necessary.  We'll reverse channel 2 by changing the +100% to -100%.
Now the two servos move in opposite motion.

Change channel 2 to +50%.
Now the two servos move in the same direction again, with channel 2 at 50%.  Of course, you could have a reversed lower rate throw by making the percentage negative.


HALF and FULL: Confusing yet Powerful Switch Controls

In order to do anything with switches, we'll use the HALF and FULL inputs.  By themselves, they don't do much of anything.  Let's channels 1 and 2 to to the sources HALF and FULL, respectively:
This results in both channels 1 and 2 being output at a value of 100%.  Not particularly useful, so let's mix in the GEAR switch to both of these.  Keep the default Multiplex setting of ADD.
Now we see the channels acting like switches.  As we toggle the GEAR switch, we see channel 1 switching between 0% and 100%; channel 2 switches between -100% and 100% (just as we typically want most switches to behave for real).


Setting up a Switch

So, the standard way to set a simple on/off toggle switch is to use the FULL input.  For example, to map the GEAR switch to channel 5, we would do this:
Note that you can specify a delay and a speed in seconds.  The speed is especially nice for things such as flaps and landing gear, since you can get a smooth scale operation.


Mixing a Stick and a Switch ("throttle enable")


Now let's mix a stick and a switch.  As a practical example, we'll set up the THR switch to enable the throttle stick.  If the THR switch is off, the throttle stick is ignored. This is a good safety feature; when you're plugging in your batteries or carrying the model before you've unplugged your batteries, you won't have to worry that the radio will bump your chest and spin up the prop.

The Multiplex parameter can be one of ADD, MULTIPLY, or REPLACE.  We specify REPLACE so that when the THR switch is off the output value which would normally be specified by the stick position is replaced by -100%.  So, no matter what the stick position, the throttle can't be activated.
Combining Multiple Mixes ("dual rates")


Finally, let's look at what we need to do to set up dual rates.  This is pretty simple.  You can add multiple mixes to the same channel.  The switch specifies which mix takes effect (it can actually be a lot more sophisticated, but we'll cover that later).  So, this mix:
follows this logic:

The nice thing about er9x is that you can use a single dual rate switch to manage multiple channels.  You could repeat the above lines for the elevator and rudder channels, both of them specifying the AIL switch.

Lynxmotion sells Aurora 9 gimbals.  "these gimbals feature high sensitivity, 8 ball-bearings, and adjustable tension. You can enable or disable self centering on both axis and enable ratcheting on the Y axis."  Somebody mentioned they can be fit onto a 9x by removing a pair of tabs and soldering the wires.

Servo City has pin crimpers at a pretty good price.

Email ThisBlogThis!Share to TwitterShare to FacebookShare to Pinterest
Labels: miscellanea

Shipped with this quad.

Email ThisBlogThis!Share to TwitterShare to FacebookShare to Pinterest
Labels: transmitter

Flying in the Rain 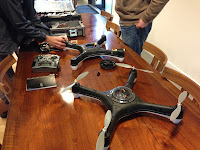 I've been chatting with Sean Headrick of aerotestra.com and he brought over his latest thinshell model, the Hugo to fly.  It was pouring down rain, but no problem!  Everything but the props are enclosed in the body, including the motors.  There's an interior shelf that holds 2 3S 2750 batteries.  Sean gets about 20 minutes of flying around (not just hovering) with this. 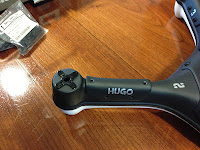 The units look really nice, and are pretty light.  The frame is 440 grams.  It's two halves are permanently bonded together, and each arm has a hatch for accessing the motors and ESCs. There's a top shelf in the center for the flight controller, receiver, and any other electronics.  I'll be helping him with some testing and flight controller selection/tuning.

As a bonus, we did some crash tests.  Quite sturdy!  The last crash took a prop off and pulled a motor loose; Sean's got a new double-cup design that will strengthen up the motor mount.

Here's some videos... flying around in the rain, and then crashing the unit to see how much of a hit it could take.  To best see the rain, watch in HD!

Bending Depron/EPP with a Heat Gun 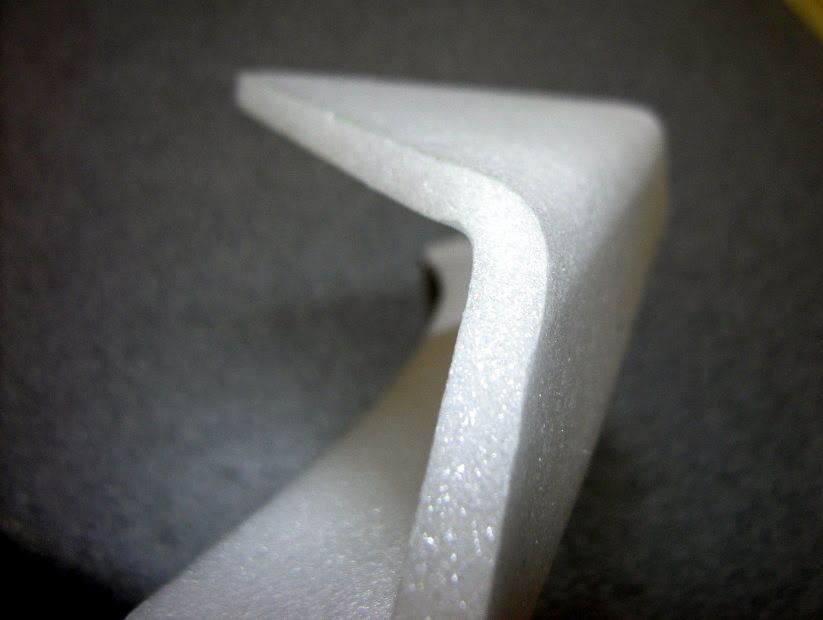 JoseIco has an interesting way of bending foam with a heat gun at 300 degrees C.  He notes the wing tips are light, clean, stiff, and neat.


The mounting tabs were designed to fit on a Gaui 330x frame. I used micro servo mounting screws to screw the shell together. I made a cutout for the "ABC" status LEDs but I missed the "TX/RX" LEDs. I might incorporate it in the next iteration.

ChineseJade.com is a highly regarded source for Walkera parts. $5 worldwide shipping.  Link is to the LB page. 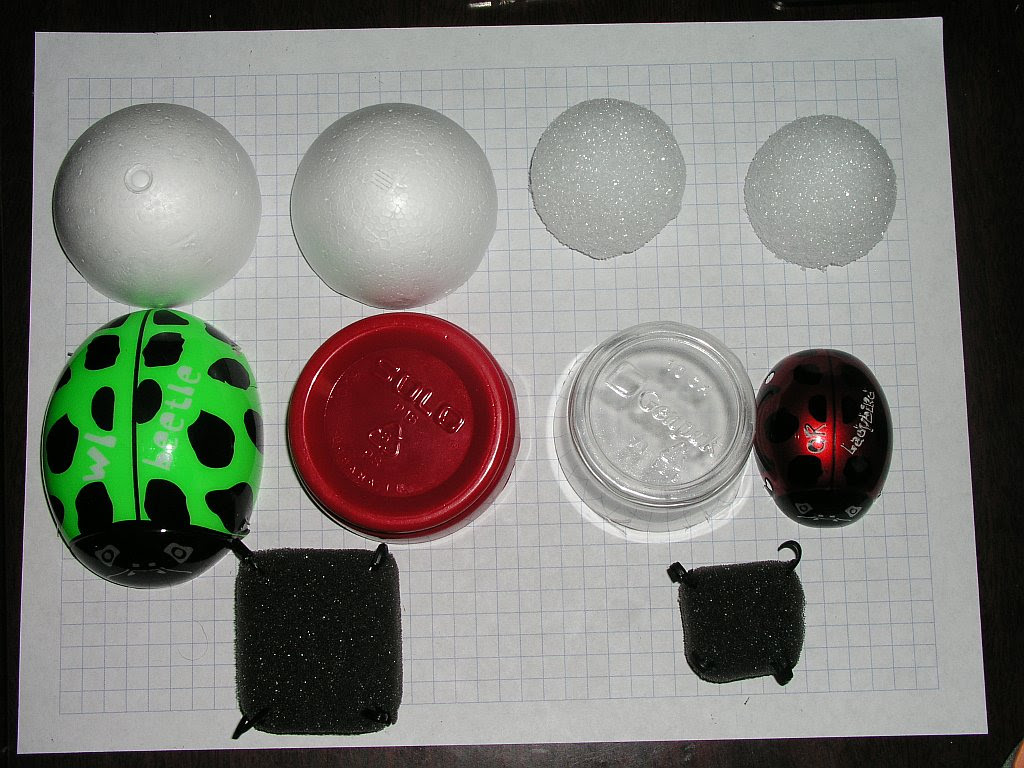 Lightweight foam canopy replacements for nanoquads.  Cuts weight in half, made from 1/2in foam.

ServoCity has 2-axis spring-loaded joysticks... just the thing if your're thinking of making a tank-like controller!
Posted by Mark Harrison at 12/07/2012 11:36:00 PM No comments:

It's a 3D world, and we're just printing in it!

Or rather we will be...  getting access to a Makerbot when it's delivered in January, so I'm going to stash some notes here.

Email ThisBlogThis!Share to TwitterShare to FacebookShare to Pinterest
Labels: Makerbot

Motorhead has released a new version ("R3") of the EzFly.  It moves the motor forward and has an extended nose, both features which make it easier to get the CG forward.

EzFly Thread, check out the R3 plans in post 1.