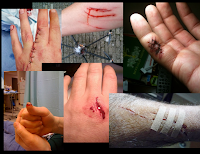 Usually when I talk about RC, quads, etc, the emphasis is on how enjoyable it is and what interesting people are involved. If it looks like they're serious about learning more, or if they're going to come out fling with me, the first thing I do now is show them this picture, to let them know they're dealing with something that, if care is not taken, can hurt them very badly.


I grabbed these pics from an RCGroups thread... you can go there for lots more of the same.  In almost every case it was somebody doing the first thing they're warned against:  Testing and building with live props.

I don't want you to be scared off by these pics, but I do hope they scare you enough to follow the basic rule:  If you're fiddling with your quad, disconnect your ESCs or remove your blades.  And if you don't, be sure and post the results as a warning to others!

My own experiences that have make me very fanatical about this:


So, I kicked myself for having ignored what I knew was best, and promised myself to never make an exception in the future -- safe working, or I'll be happy to stand back and watch.


Another thing that's worrisome:  With the advent of little helis such as the Syma 107, people are much more likely to have been in close proximity to a small flying craft.  Getting hit by one of these will sting and perhaps leave a scratch, but definitely won't do the damage depicted above.  In addition, people will pay you the awesome compliment of assuming you're in complete control of your aircraft with millimeter precision and millisecond timing.

BTW, this picture is from my recent drone presentation, filled with lots of interesting technical bits and more cheerful shots like these!
Posted by Mark Harrison at 1/12/2012 04:33:00 PM

Email ThisBlogThis!Share to TwitterShare to FacebookShare to Pinterest
Labels: safety