Report from the Walt Muciano Fly-In 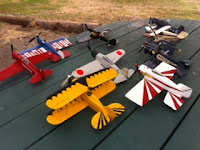 "Walt's designs were simple to build and flew well. Ideal for kids in the 1950s  and 1960s to enter C/L flying for less than $10.  Still great fun for us Old Guys in their senior years! But nowadays, more like $70. 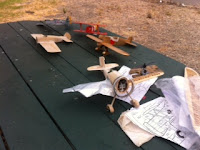 "At the other end of the display table were my StuntMaster, Me-109, Little Bipe. Wendell-Eillisms, and Curtiss F11-C2 'Goshawk'. All Musciano designs. I love building them but spread myself too thin and never get to finish them!

"Just a few of the 1/2A models at today's contest at Osborne Field. The rest were flying in perfect weather for C/L. Tons of adrenalin-pumping fun!"

Those are some nice looking planes!

Email ThisBlogThis!Share to TwitterShare to FacebookShare to Pinterest
Labels: control-line
Here's a pretty slick deal... make a quadcopter out of a bixler and fly it around as a VTOL craft.  I'm going to give it a try! 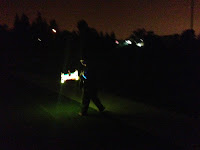 Fitted the NoodleCopter with lights... pretty easy, just ran LED strips down each hollow pool noodle.  Worked pretty well!  For quickness, I used four batteries, one for each strip and just taped them to the arms. 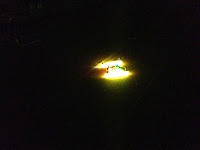 It looks really nice up in the air, with the colors of the pool noodles nicely standing out.  This picture is a bit shot out, but you get the idea.  I'm going to try to balance the brightness of the red and green arms with the yellow arms.

Update: Don't cut battery slots in the noodles!  An unmodified noodle has some pretty reasonable torsion strength, but with slots cut into it it developed a lot of twist.  I put two CF struts across the top to compensate. 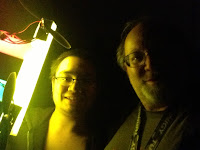 Happy Test Pilots!  It was our first night testing, so there was a bit of stress involved.  But not to worry, everything worked out well.  Hooray!
Posted by Mark Harrison at 8/14/2013 05:41:00 PM No comments:

Email ThisBlogThis!Share to TwitterShare to FacebookShare to Pinterest
Labels: NoodleCopter 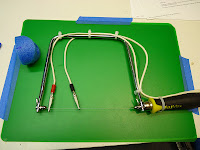 Here's how I put together a quick-and-easy handheld hot wire cutter.  I started with a coping saw, removing the sawblade.  I ordered some 28 gauge nichrome wire from ebay. 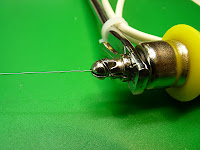 I loosened the handle, and wrapped the nichrome wire around both ends of the sawblade mounts, pulling it tight.  Screwing the handle tight brings the wire tension to the perfect amount. 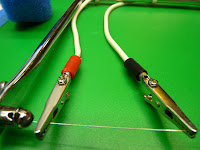 I split an old extension cord and crimped an alligator clamp to each half. 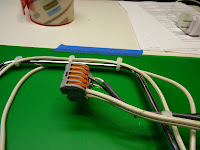 Attaching the wires to the power supply. 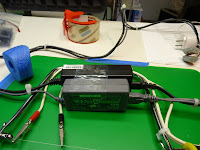 I had a couple of scrounged old power supplies sitting around.  I had hoped to find an old printer power supply that was about 30V, but I only had a 12V and 9V.  I put these together  in parallel.  It was just enough power for the small cuts I needed to do. 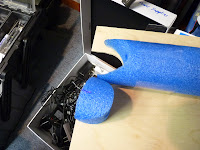 This was in service of the noodle copter, and I needed to cut some circular fittings on the end of the foam pool noodles.  I used a 2 inch hole saw to cut a template in some 1/8'' ply.  It was just about perfect. 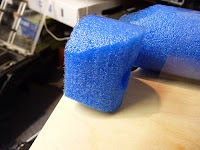 Here's a cut off end.  The wire was just hot enough for a clean cut. 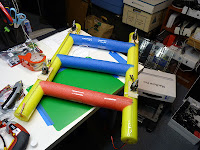 Here's the prototype body, with the pool noodle arms glued together with Beacon Foam-Tac.

I'm still hunting around for a better power supply.

I'm going to try cutting out some flat wing surfaces by clamping the coping saw in the jaws of a Black and Decker Workmate.
Posted by Mark Harrison at 8/11/2013 09:41:00 PM 1 comment: 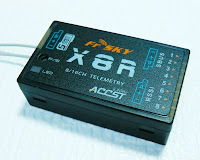 Taranis and X family receivers have three failsafe options:
While Binding or doing anything with your Rx/Tx, be sure and disable your props.


Now you're set for normal DSM2-style binding.  I've got a LemonRX receiver ready to go.
Sometimes the Tx and Rx won't bind if the Tx and Rx are too close together.  If you suspect this is the case, move the Tx away from the Rx about 5-6 feet and try again.

Binding with the built-in module is pretty simple.
tl;dr: there's not a bind button, it' on the model menu. 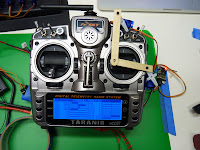 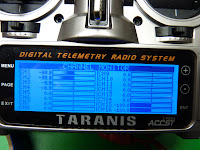 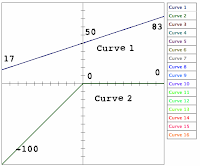 Here's the settings to make a 6-position switch for autopilots.
tl;dr: Create two 3-point curves with the specified points.  Mix onto channel 5 switches C and D using those curves. 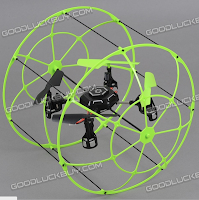 GoodLuckBuy has a nifty miniquad in a cage.  Check out the video where it rolls up the wall and across the ceiling.

Notes for flashing the Arduino bootloader on the HobbyKing Pocket Quad.

If you do the DIY endoscope, feel free not to let this blog know!

Kinematics of Mechanisms from the Time of Watt over at Project Gutenberg.  I love these old things!

Email ThisBlogThis!Share to TwitterShare to FacebookShare to Pinterest
Labels: miscellanea

Amazing, it flies rather well!  It catches the wind a bit more than the Arcticopter as might be expected.  Orientation is wonderful... no doubts which end is which.

Alex is going to make another one for himself.  It seems like it will be the perfect trainer craft... pretty much impossible to crack an arm in case of a crash, and I'm imagining that as loosely as the motors are mounted with the zip ties that the motor will shift before taking any serious damage.

Here it is flying in the front yard, in some pretty stiff gusts of wind that blows down the canyon that makes up our street.  It's got a KK2 installed, since that what was lying around.  Alex suggests transferring an APM into it.

Email ThisBlogThis!Share to TwitterShare to FacebookShare to Pinterest
Labels: NoodleCopter

Here's a really clear online text to speech system.  I think I'm going to use it to record some Taranis-specific audio files for the APM.  QueenElizabeth is I think a really good voice for this, as it seems to be quite legible (what's the audio equivalent of legible?).

If you're moving an OrangeRX module from a 9x or 9xr to a Taranis running OpenTX, you need to set the module to: