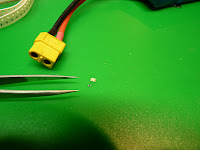 ... Until you get the bright idea to use SMD resistors to save weight! See the tiny white thing?  That's the LED.  And the little spec beside it, that's the resistor.  I had no idea they would be so small... it didn't occur to me that the ebay vendors would be photographing those things in such closeup.  I'm going to try to see if there's a larger size of SMD resistor.  Ideally I would be able to solder the resistor directly to the LED, forming one piece to mount.  BTW the white thing in the upper-left is the package of 50 resistors. 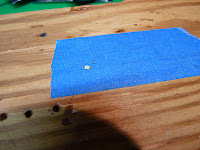 Here they are getting ready to be soldered.  It turns out that it's possible, but I didn't get any pictures of the soldering process, mainly because I wasn't optimistic enough to have a camera ready.  I'll follow up with some notes on how I did it and some pictures.

This is for adding some nav lights to the ladybird.  If there were some ready-made ones I think I would buy them without hesitation, but it's been educational learning how to deal with such tiny pieces.
Posted by Mark Harrison at 7/07/2013 11:53:00 PM