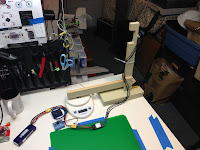 I'm starting on a project to measure some motor/prop/battery combos, so I took the chance to update my thrust jig to hold some bigger props. 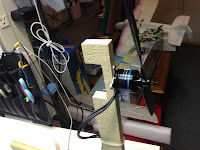 There's a cutout where the motor mount attach so that I can use M3 25mm bolts.  Most of the motor mounts are sized for M3, and 25mm are the longest M3 bolts I've got handy. It's still plenty strong. 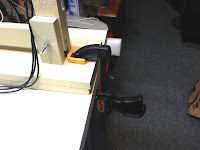 Be sure and clamp the entire thing securely to your bench so it doesn't fly off right into your face!  If there's any vibration, this unfortunately magnifies the noise.  I'm going to try putting some padding underneath to quiet everything down.

(update below on the L-bracket connection.) 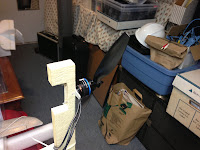 I had some crossbars screwed onto the motor cutout as a reminder not to put my fingers near the prop line.  They added to some vibration, so I took them off.  The thing is loud enough that there's no doubt where you should not be putting your fingers.

You only need to spin the props up for a few seconds to take the thrust reading.  You can then shut down and then read the values off the watt meter. 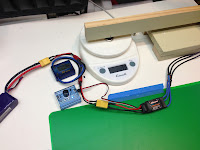 Here's the electronics.  There's a watt meter in the power circuit, and a servo tester to control the motor speed.  After running the initial tests I finally got around to swapping out the Deans connectors to XT-60s. 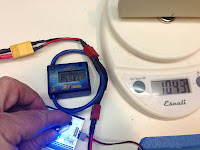 The watt meter nicely has a hold function to measure the peak power use.  Unfortunately, the scales don't have such a feature, so you have to keep your eye on the max value there. 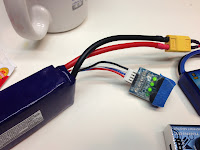 It occurred to me that it's a good idea to put a monitor on the battery to beep when the battery starts going low.  I taped up the speaker to quiet it down.

Update: it's working pretty well, with the exception of excess vibration when spinning big props at high speed.  That's because when I drilled the mounting hole for the L-swing I left a tiny bit of clearance so the thrust would transfer smoothly to the scale, but that introduces slop which induces vibrations at high thrust. I've got some 4x10 bearings ordered which will hopefully smooth things up.

Here's the unit in action: