Here's how to use a crimping tool to make your own servo connections.  This can be useful to get an exact fit, and also saves you from having to keep around lots of servo wires or wait for servo wires of a particular length to be shipped.

Note that there are two kinds of servo connections: "JR" (also known as "Universal"), and "Futaba".  As the name suggests, JR is the most common type.

Note also that this is an area where people mess up the gender terminology.  Follow the metal, and not the plastic covers.  The large square plastic cover (which looks like it might be the female) actually holds the three male connectors. 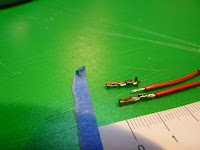 Here's two female connectors, one crimped and one out of the package.  That's a 22-gauge wire.  Note that there's two sets of crimp teeth, and both of them are in contact with stripped metal.  If you try to crimp over the insulation, you will chop the wire in half. 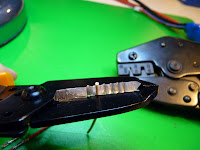 Strip 5mm of the end of the wire. 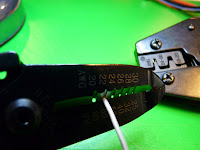 If you don't have a tiny-gauge wire stripper, you can carefully strip it with an exacto blade.  After its stripped give the threads a twist to keep them together, but don't tin them. 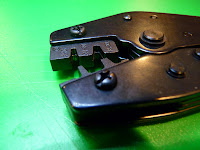 Here's the crimping tool.  Stick the connector into the gap of the crimper and line up the wire end with the jaw edges.  The gap in the connector should be facing up.  Note that we're looking at the gauge numbers on the jaws -- this is important, it won't work well if you reverse them. 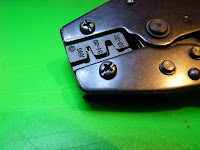 Close the crimping tool a couple of clicks, until the jaws just start to mash the connector.  This will hold the connector nice and tight, making the next steps easy. 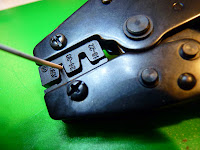 Put the wire in the hole in the connector.  Don't put any insulation in the hole. 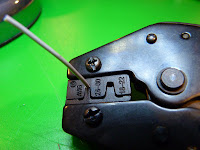 Once everything's lined up, squeeze the crimper to the last click.  The crimped metals are now bonded together.  Wires in real planes are required to be crimped rather than soldered, since soldering makes a hard joint that when vibrated can cause the wire to break. 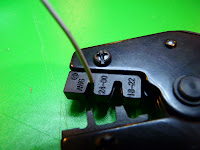 Open the jaws.  Remove the connector carefully by pulling on the wire.  Don't pull on the end of the connector... it's not very strong and will bend easily.  If you bend it too much it will break off. 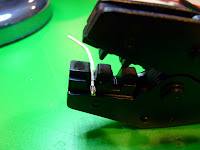 Here's the flip side of the crimper.  Note that the jaw is slightly recessed to keep the end of the connector from being crushed. 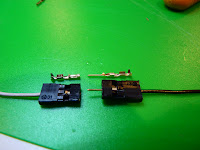 Both the male and female connectors fit into the same plastic housing.  Here's a shot with one wire of each inserted into the housing.   Next post, we'll show how three wires will fit in, and how the square male cover (again, the thing that's often mistaken for the female side) fits into place.
Posted by Mark Harrison at 2/27/2011 09:25:00 PM