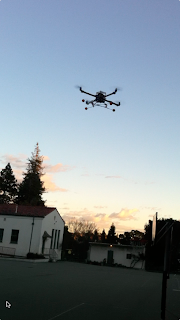 youtubage: part 1, part 2.  Recorded this with the iPhone... Next time we'll bring a better video camera.  Between Josh, Andreas, and myself we've got 3 GoPros on order, so there will  really be very little excuse!

Josh and I did a pre-maiden (youtubage) the other day, trying to tune in the gyros.  We brought it down hard,and popped the bolts off the nylon connector holding on the landing skids.

But, Andreas to the rescue!  He brought both his helicopter flight skills and his helicopter training wheels (rescued from his old heli which had an unfortunate landing in a tree).  It was a great training session for me:  learning to fly a plane and a heli is quite a bit different.  With the heli training wheels, you give just enough power so that the unit can scoot around, giving you practice to keep it centered on one spot.  The secret is an agile right thumb... keep it wiggling and constantly responding to the bird.  It also doesn't pay to spend a lot of time trimming when you're first starting out, since you'll be practicing your thumb-twitch.  It does pay to trim the rudder, so you can keep the unit pointed away from you, making it easier to keep your directional orientation.

Here's a closeup of the training wheels.  There's a bracket in the middle, to which four 3mm carbon fiber hollow tubes are attached. Some ping-pong ball sized sphere are place on the end.  The bracket points all four tips down, so there's a bit of bounce when your bird hits the ground.  Andreas attached the training wheels using some wire wraps.  When it didn't look like this was going to be enough, he grabbed some thing bungee cord from his car and used that.  Note to self:  add duct tape to flight box! 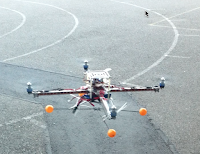 I found a box that just holds the Acticopter, but the blades have to be removed.  Here's the complete Arcticopter flight pack, including radio case.  The box in the middle is a recycled MacBook box.  I'm going to get something to cover that up.  It would be so sad for someone to break the window of my car thinking they had scored a MacBook only to discover they had an old box filled with random RC multicopter parts. The poor guy would probably walk around in a bad mood all day long!
Posted by Mark Harrison at 2/26/2011 09:05:00 PM