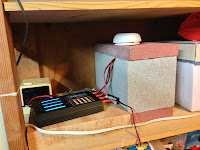 Here's my new battery charging bunker.  It's a concrete block, with flats on top and bottom.  I chiseled out a slot for the wiring.  I'm going to try the "sand in bag" technique for the top.  The idea is that you put the sand in a plastic bag, and a fire will melt the plastic, smothering the battery.  I might keep the concrete flat on top of the bag, so it will totally seal.  There's a smoke detector on top.

Here's the reason for the new battery bunker.  It was a 3S 500, relatively small.  I'm pretty paranoid about watching over charging, so I was there when one of the cells popped.  I took it off the charger and examined it; within a couple of minutes smoke started coming out, so I tossed it out the door and it burst into flames a few seconds later.  I wasn't concerned with the leaves, because it was a rainy night and everything was soaked.  I've also got a fire extinguisher next to my bench; you should too!

Update: with the recent dry weather, I have a sand-filled bucket sitting outside the door.