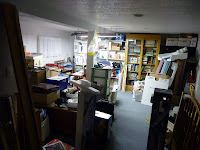 A friend asked about my workshop, so I thought I would take some pictures and post.  It's in a corner of my basement.  A coworker gave me some nice florescent lights which I've put to good use here.  I hot-glued some foam on one end so as not to bang my head. Behind the big stack of all kinds of foam is a super-heavy vertical file.  I brought the nice glass-door cabinet back from China.  It was only $60!  We're not allowed to count the basement space in the square footage of the house because the ceiling is not 8' high, but it's still a nice work and storage space. 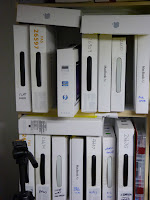 Sometimes I worry that I'm going to end up on the hoarders TV show.  But at least my hoarding is OCD-level organized... I could be a crossover show!  I've scrounged these computer boxes from recycling; they make great shelf organizing units.  The shelves were from Target.  I got them on sale, three pieces for $99.  I've been trying to think of an excuse to get rid of them for the last 20 years, but it always seems easier to repair them than to replace them.  That's OK, I'm sure the replacements would be identical-looking ones from Ikea. 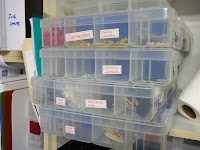 Of course, I also have a full complement of plastic organizers.  I have some from Harbor Freight which are nice and tight, but with razor-sharp latches.  My favorites are from Ace.  As you can see, I have a label-maker and I'm not afraid to use it. 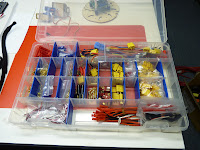 I could run a small hobby shop from my supply of electrical connectors.  About half of my first six months of messing around with RC planes was spent waiting for various connectors to arrive from China.  Apparently there's some kind of international regulation that no two pieces of RC equipment in the world should come with compatible connectors.  See the blog label connector-mania to enjoy the fruits of my many hours of research into electrical connectors and their names. 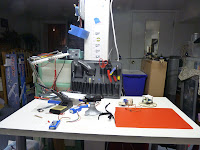 My workbench is the cheapie table from Ikea.  The legs were $20 for 4, and the top is $6.  I saw Crash Hancock had a nice glass tabletop to protect his workbench.  I thought about doing this until my wife pointed out that I could probably buy 20 tabletops for the same price.  One of the smartest things I did was buying a nice Weller soldering iron.  The tool holder thing is from a Harbor Freight tool case.  It's attached to the pier with a big zip-tie, the plastic industry's answer to duct tape. 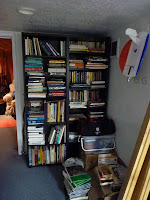 Here's my view when sitting at the workbench.  On the wall is my French-themed Nutball.  It was supposed to be a patriotic USA design, but everybody that sees it thinks it's French. The bookcase holds the overflow from upstairs.  It's from Ikea too!  I didn't like how things were arranged, so I'm rearranging it one more time (see above comment regarding OCD!).
Posted by Mark Harrison at 11/28/2011 10:41:00 PM