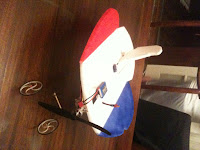 #3 Rolling the NutBall is an easy to do and basic maneuver. Once you've mastered it, the roll becomes the basis for the snap roll, spins, inverted flat spin (complete with sound effects), the inverted 'elevator', both up and down, plus other silly weird stuff.

When you go out to practice, by yourself seems best and concentrate on the one thing and do just that.


#4 Here's another easy fun one anyone can do, the 'upright elevator', although it's all down elevator, no up. You'll need a rearward CG for this one, but start off with what you've got to see the difference it makes. Gain lots of altitude and point the nose straight into the wind. Now, hit full up and hold, and kill the thottle at the same time (again, it's in the timing) and use just the rudder to keep it facing into the wind. It should float down like a leaf, and with a low wing loading and a nice breeze you can plop it right down on the wheels. You can do this one inverted too.

Email ThisBlogThis!Share to TwitterShare to FacebookShare to Pinterest
Labels: nutball