OHD Update, and Portrait of the Drone Maker as a Young Man 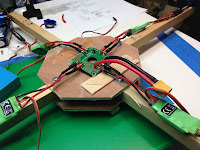 Here's an update on the One Hour Drone (OHD).  It was bare again after Andreas used it as a parts donor.  Second generation drone enthusiast Alexander and I wanted to refurbish it and kit it out with new electronics. We had discussed tossing the Wago-attached power distribution unit, and that's what we did, replacing it with a Hobby King PDU. 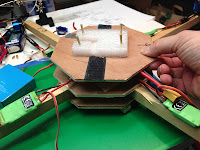 We had to pry off the top plate of the quad (the down side of super-gluing everything together!) but managed to do so without mangling things too badly.  This height looks about right for the PDU to be safely ensconced in the frame. 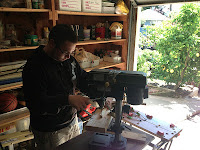 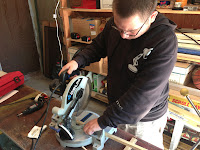 For spacers between the top and middle plates we're using a few scraps of a 10mm x 10mm stick we had sitting around.  We had some elaborate plans of bolting everything together so we could get to the PDU if necessary.  It turns out we forgot to get 1-1/2'' bolts, so we decided it would never be necessary to get to the PDU again and super-glued the spacers and plates together. 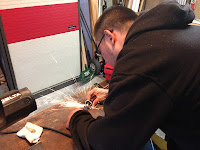 I had a couple of long-shaft motors that were spares from another project, so Alex had to cut the shafts off to accomodate the top-fitted motor brackets. 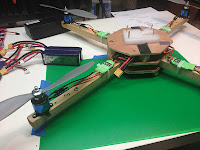 Current state: everything ready for the landing gear and flight control board. 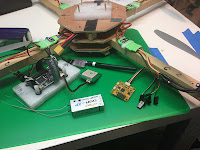 We'll either use the APM (on left, attached to the GPS and radio) or newly acquired OpenPilot CopterControl. 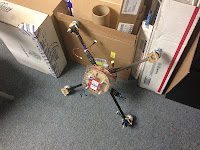 The beloved Arcticopter V served as parts donor, but will soon see the sky again as Arcticopter VI!  It's still the best flyer in the fleet, I think because it's built so light.
Posted by Mark Harrison at 6/14/2013 02:52:00 AM

Email ThisBlogThis!Share to TwitterShare to FacebookShare to Pinterest
Labels: construction