Adding some LEDs to the ArctiBaby 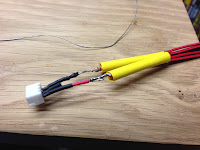 I put some LEDs onto the ArctiBaby, hoping to make orientation a bit more visible.  Here's the 2S connector for attaching to the battery. I put an 82 ohm on the wire, which split to 4 power wires to each of the LEDs.  I'm using 28 gauge servo wire. 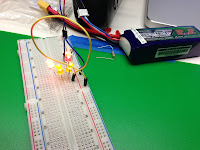 Here's my mockup to make sure I was getting the circuit right.  I put one resistor in series with four parallel LEDs.  I'm going to ask some gurus if that's the right thing to do, but it seems to be working. 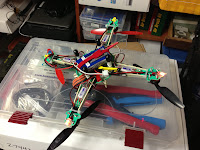 Here's how I attached the wiring.  I zip-tied the end of each wire (where the LEDs are) to the end of each arm, with the LEDs pointing out.  The front had two 5mm frosted amber LEDs, and the back had two 5mm clear reds.  I put some scotch magic tape over the reds to get some frosting effect. It didn't work very well. 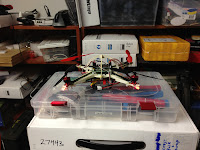 Here's the final result.  I'll give it a try tomorrow and see how the visibility is.  Right off the bat I can tell you that amber/red is a pretty poor color combination for orientation differentiation. 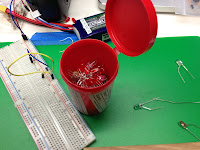