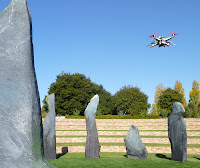 After letting it sit around for far too long, I finally got the ArctiBaby tuned and flying.  I'm using my old MultiWii board.  For some reason, it's not able to sense the accelerometer, and something is stopping the config program from showing any sensor data, but the PIDs and other settings can be manipulated, and acro mode is working.

So, as I've been meaning to do for a long time, it's a great chance to practice Acro mode.  Hooray!  I've been flying it outdoors a couple of times a week, and it's really helped my piloting skills.  I need to fix it up with something that shows orientation because it's so small.  With stabilization it's not so bad, since you can let go of the sticks and  then experiment to find your orientation.  But in acro mode, you're tipped and headed sideways, so you've got about 1 second to figure things out before plowing into the ground.

And speaking of plowing into the ground, there are two weak spots on the arms.  I've busted two of the arms (hint: don't be tricked when flying over fake grass layed out over concrete.  It's not as soft as it looks!)  I patched them up with no problem, but if you get a Turnigy Microquad (which recommend!), reinforce the arms before you fly.  I've got some pictures of the repairs I made and will get them up in a following post.

Below is a video of how it's flying after my first round of PID tuning.  I've updated them a bit (increased P, decreased I just a little) and now it's more responsive and still rock solid.   Indoor flying is no problem, except that my son finds the motor whine excruciating ("way worse than the mosquito tone!").  I can't hear a thing of course, so I fly it in the living room when he's not around.  The motors are small enough that they'll stop if you stick a finger in the blade, so I'm not too worried about shredding the upholstery, etc.

Upcoming: get the APM2.5 on the thing, and try some indoor waypoint navigation at the next Concord Model Engineers indoor fun fly!

Email ThisBlogThis!Share to TwitterShare to FacebookShare to Pinterest
Labels: _toc:ArctiBaby