[Reserved for the HK link] 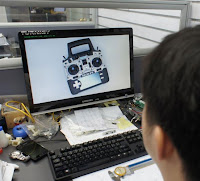 random stuff the internet thinks regarding the new Turnigy Tx...


Hi guys,
Sorry I have not been here a lot lately. With 2 small children and some important changes coming up in H-King (ERP & HobbyKing V2) it's difficult to make time to chat with you all.


Today I was talking with the lead engineer on the project and he said that tomorrow he should have the final version of the plastics from the injection factory. Once he gets them he will begin final test fit and QC before production.
He also said that mass production starts in August, but I'm not going to promise you that.


All pricing is still on track and it's still totally open source and module based.

the 9XR has an inbuilt antenna and comes with a DSMX/DSM2 module which uses the inbuilt antenna. You can also plug your own JR module in and use an external antenna.
We have given the 3D files of the module antenna system to some vendors like ImmersionRC so they can make modules for the radio 433Mhz etc.

@numanair module based with inbuilt 2.4 antenna plus options for FASST, DSMX & long range 433mhz plus it looks & feels much nicer.


Posted: 11 Apr 2012 at 10:35pm
The 9XR is designed and built completely in-house (my back pocket reminds me of this every day).
It will use the atmega chip and can be flashed with your existing customised software. In fact, it comes standard with a similar rom to one you have mentioned.


We wont be sending out eval units because we have done alot of testing in house already and its unfair to make customers wait for further evaluations.


Posted: 12 Apr 2012 at 9:38pm
Quote: How many channels Anthony, and will it hold genuine CE certification?
All our CE certs are genuine from Genuine testing companies.
Unfortunately competitors like to contest those certs by retesting and making comments to undermine their legitimacy.


Just to keep the critics quiet we will be using TUV to test.


Posted: 13 Apr 2012 at 6:02pm
The 9XR has a pin-out in the battery compartment for easier flashing without needing to unscrew the case.
We are taking care of the customers that like to fiddle, don't worry about that.


Posted: 15 Apr 2012 at 12:37am
Backlight is standard
Has inbuilt and module based antenna system
Button config makes sense
Spare parts avail from the start
Switch and pot quality far better than previous version.


Posted: 15 Apr 2012 at 10:21am
The 9XR will be $50.00 and targeted at the standard user that likes flying, not fiddling with his radio or looking for a shady spot to see his LCD.
I like that radio and we're working on something similar (android based) but it wont have the takeup that the 9XR does.


I think Futaba, JR and Spektrum are about to get a hard kick in the nuts


Posted: 15 Apr 2012 at 11:17am
Quote: Would be good if you could make them already flashed with the frsky 2.4 telementry already installed
We're working with them on a module for the 9XR.


Posted: Today at 10:56am
I saw T2 plastics today, they looked good but work was still needed.
I would say we're 3 months out from release. (A GUESS!)