Here's a few notes by Andreas on laying out a Zii with an Ardupilot Mega. 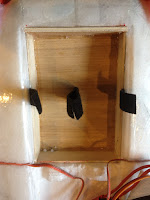 In his second Zii, he started with a plywood battery box.  He cut this himself; it's sized to hold two 4000 mAh 3S Turnigy Nano batteries. 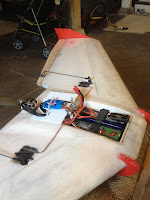 To keep the radio components separated, he: