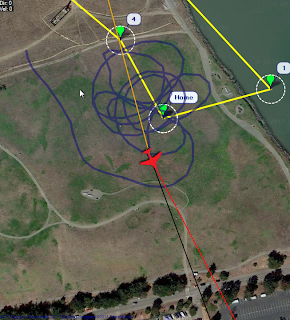 Hooray!  Finally got the xbee assembled and tested... still seems somewhat miraculous to be logged into to a computer flying around overhead.  Went with Andreas and his friend Reto, (an old schoolmate visiting from Switzerland -- they did their robotics project together), to the park to try fully automatic flight controlled by waypoints.

Had some initial difficulties connecting the xbee.  It turned out that rebooting the vmware windows session on my macbook fixed that problem.  The pre-cached map tiles worked well.

Shiny laptop screen + Full Sun = invisible.... will figure out some boxy thing to provide some shade for the screen.

Video cap of part of the flight is attached below. The waypoints are wrong. Be sure and save the waypoints to a file after you fiddle with them if you intend to play back the log files later. 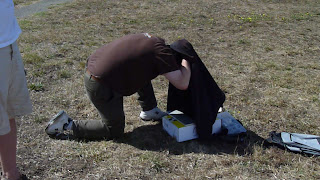 The main goal was to get the unit in the air, and exercise all the modes.  All of that worked and we finished up with everything intact, so we considered it a great success... Hooray!!

Still need to hook up the magnetometer, pitot tubes, and battery monitor.  But it seems things are so far going not too badly!  Also need to do:  hook up APM to the simulator, build APM from source and fly that.