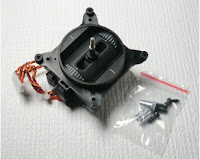 OpenRCForums user Myckey has a nice pair of posts on upgrading the 9xr Pro with Taranis gimbals.
I'm preparing to try it.  I'll make a video and take some pictures.  Prepping for that, here's the steps as I understand them.

We need to modify each gimbal to fit in the 9xr gimbal hole.  Each of the four corners of the gimbal has an "ear" with two holes.  A bit of trimming will allow the Taranis gimbals to fit securely into the 9xr gimbal mounting plate.

Inspect the fitting, attach the wires, test the harness connections,  and close up the case!
Testing

Two things can go wrong with the wiring.  The X and Y axis can be swapped (i.e. moving the stick up and down shows motion in the horizontal direction), and the X and Y axes can be reversed (i.e. left stick motion show right motion in the radio).


Myckey's instructions are here.  A lot of people have wanted better 9xr gimbals, so a big shoutout to him for figuring this out in such a superb way!