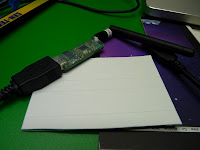 Thanks to a comment by Andreas M. Antonopoulos about the fragility of the USB connector, I made a small ground module case that seems to provide a lot of strain relief. 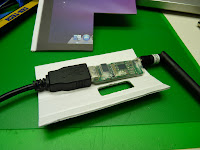 It's pretty simple -- I cut it out of thin cardboard, scoring the cardboard so it would fold neatly around the unit and the USB connector.  The scorings are 10mm, 20mm, 10mm apart.  I cut out a window to see the LEDs on the board. 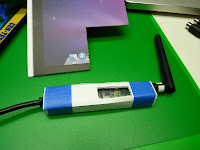 Here it is all taped up.  The tightest part is wrapped around the USB connector.  Tomorrow I'll leave it plugged in for a while and make sure it's not getting too hot.  If it is, I'll try expanding the hole, or even just trimming it off and only keeping the strain relief on the USB part of the board. (update: no apparent heat buildup at all.) 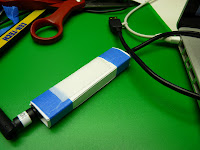 I taped the side with strapping tape to keep the rectangular shape and put a piece of velcro on it.  If I had a 3D printer or a laser cutter I would probably go crazy making stuff like this, but the cardboard seems to work nicely. 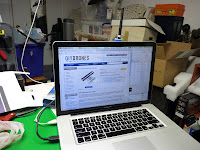 I didn't want the cable catching on things, so I ordered a 1 foot USB extension cable from Amazon and used that cable instead of the one that shipped with the unit.  I pulled the cable around the back just enough so that it removed the slack, but not so much that it caused any strain for the USB port.  A right-angle USB cable would be perfect, but I don't think I've seen one. 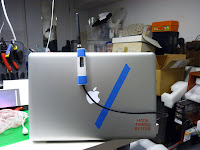 Here's the view from the back.  I'll measure the signal strength later and make sure I'm not causing any interference.
Posted by Mark Harrison at 4/29/2012 12:23:00 AM