Here's the Wall Street Journal article... be sure and watch the video.  They did a great job!

A nice article by AP's Marcus Wohlsen.  Great Pictures by Eric Risberg!  Andreas and I met with him last last week and demoed some of the work we've been doing here.

BERKELEY, CALIF. (AP) - Sharp-eyed dog walkers along the San Francisco Bay waterfront may have spotted a strange-looking plane zipping overhead recently that that looked strikingly like the U.S. stealth drone captured by Iran in December.

A few key differences: The flying wing seen over Berkeley is a fraction of the size of the CIA’s waylaid aircraft. And it’s made of plastic foam. But in some ways it’s just like a real spy plane.

The 4 1/2-foot-wide aircraft, built by software engineers Mark Harrison and Andreas Oesterer in their spare time, can fly itself to specified GPS coordinates and altitudes without any help from a pilot on the ground. A tiny video camera mounted on the front can send a live video feed to a set of goggles for the drone’s view of the world below.

Interestingly, I got an AP photo credit for the photo taken by the drone. 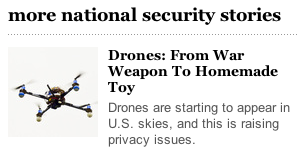 Larry Abramson came out and flew with us one morning, and filed this story.  The only downside of it being a radio story is that you can't see Andreas in his bucket-style video goggles.  Direct audio link here.


Pretty good news story here.  Producer Ken Miguel did a great job on the story and got some good video.

This show (it was explained to me) is like the "60 Minutes" of Korea, covering international stories.  This is a story about civilian use of drones in the USA, and it kicks off with me and Andreas flying around and giving the reporter an FPV ride.


The videography was great... go here to see some of the stills and for a bit more background. 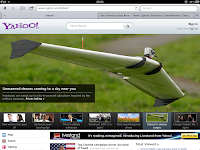 The AP story was the front-page featured story on both Fox News and Yahoo News.

Comments have sadly expired over on Fox News. Surprisingly similar viewpoints over at the Democratic Underground and the Huffington Post!

a couple of people have sent these, I need to grab some screen shots and stick them here... 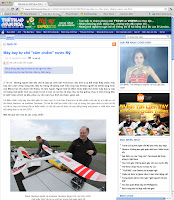