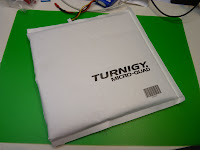 I'd been looking for a small quad kit for a while... something that I could fly inside the house without making it sound like we were under attack.  When HobbyKing announced their micro-quad I thought I would give it a go. 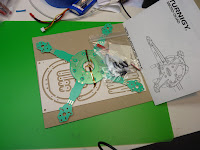 And inside the package, everything very tidily laid out.  Fiberglass body parts, and an integrated power distribution setup.  More on this below. 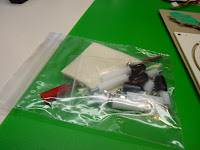 
Update: Now there's a receiver-ready prebuilt ARF which includes a KK2 board. 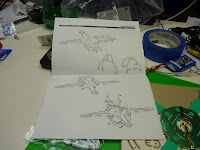 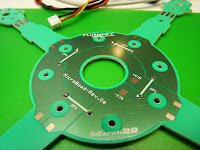 Here's the power distribution part of the board.  The power side of the ESCs are soldered directly onto the PCB pads, and there's a spot for a JST connector to be soldered. 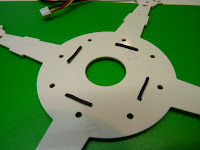 The flip side (which is the top) has the four wires necessary to interconnect the positive and negative poles. 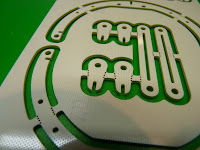 The laser cut fiberglass turned out to be really easy to disassemble.  Wiggle the pieces a bit and they will twist loose with no problem.  I used a pair of small pliers to snap off the little connector pieces. 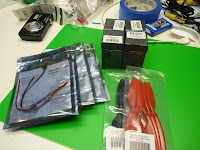 Here's the power train, minus batteries.  Hobbyking sales hint if you're in the US:  If the batteries you need are so stocked, order them  separately, and get them from the USA warehouse.  This will speed up your order shipping from the International warehouse since there won't be any LiPos that will cause slow shipping. 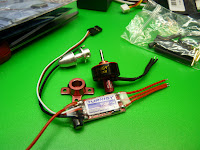 Here's one set of everything.  Vendors must love multicopters, since they sell 4x or more of all the components!

I had planned on using the nice-looking spinners that came with the motors, but the props didn't fit.  I didn't want to spend time hollowing out the props so I'll use the included prop savers instead.  You won't need the included bullet connectors or shrink tubes. 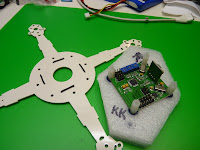 Here's my KK board, installed on my East Bay Standard control board carriage.  We won't need the carriage for this tiny unit! 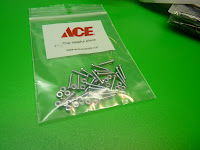 The King was out of stock on the M2x8 bolts and M2 lock nuts.  That's a shame, coz buying them locally cost an arm and a leg:  36 and 28 cents each, respectively... ouch!!  I tried fitting some cheaper imperial screws, but couldn't find any that were noticably cheaper that fit to acceptable tolerance. 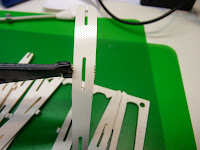 Snapping off the retaining pieces as noted above. 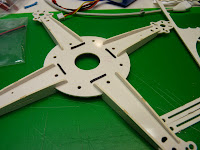 Here's the frame dry-fitted together.   It holds together pretty nicely, so you can put off gluing the pieces together until after all the other construction steps. 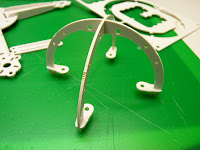 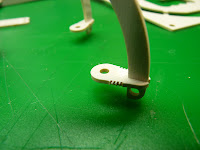 The holders were a bit wiggly.  After they're screwed onto the board it's pretty secure. 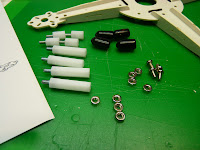 Here's the included hardware.  It's everything needed except for the motor mount. 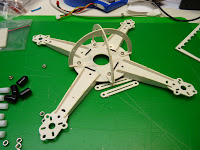 Everything dry fitted together, with the top bolted on. 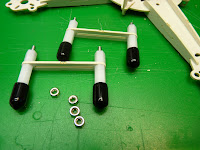 Here's the leg mounts, assembled and ready to attach. 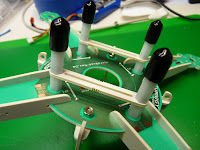 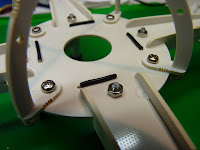 Everything attached, looking from the top. 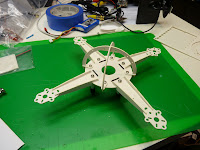 The fully assembled frame, bolted but not glued. 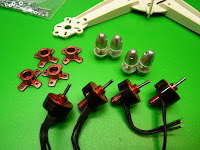 The motors, motor mounts, and spinners (which won't be used -- see the next step).

(UPDATE: ignore prop information below.  see part 2 where I recommend using a hammer to pound the props on.) 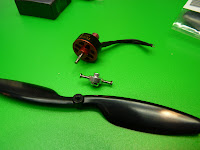 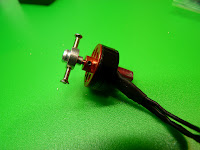 You will need a 1mm hex wrench to install the prop saver.  Put the big rounded end out. 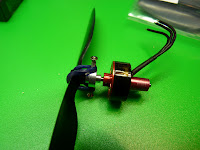 The motor includes an o-ring to attach the prop.  I've had much better luck with theraband prop savers. 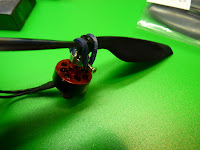 The small prop hole doesn't fit onto the end of the prop saver, but if you wiggle the prop a bit it will fit snugly on the end.  Don't forget to balance the blades.