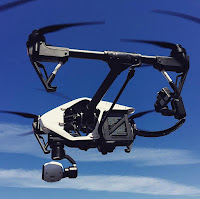 So Eric Cheng really is the coolest pilot in the world!  Look at the back of this Inspire, where he mounted a GoPro on a gimbal.  Eric writes:


I might try this with my old no-name gimbal and see how it goes.

Eric mentions he got up to 55 MPH on this video.  Impressive!